While the need for cooperation to solve communal problems is increasingly at odds with the atomisation of society, one beacon of hope is the growing number of community music projects. From projects such as the New Note Orchestra and the Bristol Recovery Orchestra to the growth of community choirs, people across the country are getting together to make music. This summer, New Note has started a new outreach project, Key Changers, a chance for us to take our musical experience out to other communities.

The common language of sound

Creating music as part of an ensemble is essentially an act of communication. Musicians have to listen to each other to ensure we’re all in the right key, in tune, and in time with each other. Whether it is a small rock group or an orchestra led by a conductor, people need to agree on the kind of music that they create, the specific pieces, and even the emotion or feel of the piece. This can be carried out in a formalised way, such as by having a musical director decide on the pieces to play, or a band deciding on a set list together. It could also happen through a mutual understanding of tradition and circumstance, such as when a group of Liverpool supporters spontaneously sings You’ll Never Walk Alone.

Sometimes, however, a group of people making music might not have a decided repertoire. Many set out to improvise, either to create a new piece or just as an exercise in itself. Then, not only do musicians need to listen to check that they are in time, they also need to follow each other and pick out melodies and new rhythms. They need to know if there is room to take a lead line in a section or whether to leave space for someone else to solo.

Improvisation has many benefits, both for experienced musicians and for those who are new to music creating. It can train people to recognise music forms, such as scales, melodies, and rhythm and improve communication.

Emotion and creativity are also very important factors in improvisation. Without a set piece to work on, people making music have to find inspiration from within. Under the right circumstances, this can help people explore feelings that they had previously found difficult to express. For example, children in Puerto Rico used improvisation to deal with trauma following the 2017 hurricane, as featured in a previous blog on mental health.

In June 2022, members of the New Note Orchestra embarked on a new project to train as facilitators for community music sessions. The project is part of New Note’s goal to reach out to groups that might benefit from communal music making in the same way that members of the orchestra have. The training will take place over five sessions, which will lead to orchestra members delivering six community-based workshops. 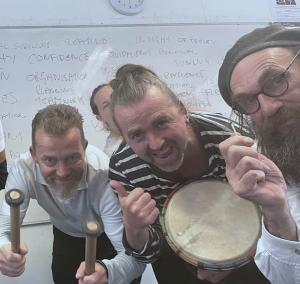 New Note will be taking their skills out into the community

The training was facilitated by Graham Dowdall, a musician and community music expert who also lectures in community music at Goldsmiths University. The sessions took the form of a short lecture and discussion about what community music is and what expectations both leaders and participants might have for a session. However, the majority of the two days was spent studying different improvisation sessions.

Running an improvisation session can involve a number of  factors. Not only do you need a space where people can create, you also need to create a safe environment in which people are prepared to open up, take risks, and make mistakes. For music makers of all skill and experience levels, it is important to have  the space to experiment without judgement.

With this in mind, the session covered some simple exercises, such as staying in time, as well as more complex challenges. One consisted of one person setting a period of time by saying start, then closing that period by saying stop. Within that time, people were free to play. In another exercise, one musician “ghosted” another by playing a similar motif to them during the session.

The key to change

The sessions so far have had a great impact on Matt, who plays guitar, mandolin, and bass recorder for the New Note Orchestra. He talked about his main takeaway from the session: “Hope. As I slowly emerge from the darkness, I imagine my future holds community work and music somehow. Key Changers offers me some hope for the future,” he said.

Ultimately, the sessions are designed to give orchestra members the tools and ideas to bring authentic experiences to the community. Community music sessions are not all in one set format. One session could be centred in singing along to a guitar as a group, while another could involve creating soundscapes using unusual instruments. The key thing is to work with people to dismantle barriers to group music making.

Beyond the enjoyment of making music, building communities — whether based on geography, mutual interest, or mutual support — is an important act. A highly commercialised society has the tendency to place too much emphasis on the individual and their buying power, rather than the joy of communal experience.

As Matt puts it: “Any community-led groups are important, especially when the government systematically dismantles anything that can’t be sold off. Voluntary and community work then becomes a tiny proto-revolution as it ceases to be under political control.“ 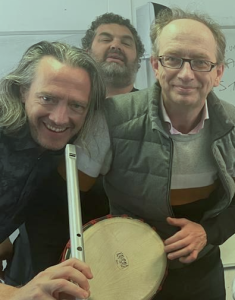 Community music making can have many advantages

Community music sessions can offer constructive alternatives to people engaged in destructive actions, such as drug and alcohol abuse. Although one session isn’t an alternative to professional medical treatment or long term support, it can open the door to new ways of communication and expression. It can help combat isolation and low self-esteem, and it can even start to repair bonds within communities. All these advantages are felt continually by members of the New Note Orchestra, and we want to use the skills we have to bring these benefits to the greater community.

Matt, who was directed to the New Note Orchestra through drug and alcohol services, talks about the importance of the orchestra.

“It helped initially by rebuilding connections to a community. One of the most crucial tools to beat addiction is reconnection. I’ve been coming regularly for some years now, and my musicianship has improved. I’ve been exposed to aspects of music that I would never have studied on my own, and we’ve received standing ovations from 300 people! That doesn’t happen every day! I’ll never leave. I have friends — real ones, not pub ones — we make music together. What more could you want from life? Aside from cake?”