The female trailblazers of popular music

“When you hear somebody with balls, that’s me.” — Carol Kaye of The Wrecking Crew, bass player and guitarist on more than 10,000 records.

“Can’t no man play like me.” — Sister Rosetta Tharpe

The story of popular music has usually been one of male pioneers with a few token women. But in recent years, a number of books, documentaries and even hit youtube videos have highlighted the pivotal roles in the sound of the 20th century played by women such as Sister Rosetta Tharpe, Carol Kaye, and Delia Derbshire.

Sister Rossetta Tharpe and the birth of rock’n’roll

Born in 1915 in Arkansas, Sister Rosette Tharpe cut her first record in 1938. Starting off in gospel, Sister Tharpe brought a flamboyance and energy to guitar playing that was groundbreaking for the time. In the 1940s, she started performing on electric guitar, and her unique take on gospel blues influenced a generation of rock’n’rollers, including Elvis Presley and Chuck Berry. And being one of the first people to use distortion, Sister Tharpe was a favourite of Jimi Hendrix. Though she faded from the limelight as male -dominated rock’n’roll flooded the airwaves in the late 1940s and early 1950s, it was during a revival tour that she visited Manchester and appeared on a BBC television special in 1964. This performance, in particular her guitar technique, had a direct influence on Eric Clapton, Jeff Beck, and Keith Richards, among others.

Sister Tharpe is now credited as the Godmother of Rock’n’Roll. In her day she dominated the r’n’b charts, and even played stadiums. Since her induction in the Rock’n’Roll Hall of fame in 2018, she has been rediscovered by a new generation of female artists.That iconic Manchester performance can be seen here.

Carol Kaye, go-to bassist for many of the biggest acts of the 1960s.

Though not a performing star in her own right, Carol Kaye’s sound is no less iconic. Playing guitar and bass guitar on some of the most important recordings of the 1960s, from Nancy Sinatra’s These Boots Were Made for Walking to Glen Campbell’s Wichita Lineman. A member of the Wrecking Crew, the famous L.A.-based session players, she played on numerous recordings by Phil Spector, The Monkees, and The Beach Boys, including the sweet melodic bass guitar lines on Pet Sounds and Good Vibrations.

“I was so chuffed to find out about Carol Kaye of the Wrecking Crew contributing to Pet Sounds. She’s so inspiring and she was there with Brian himself,” says New Note’s handbell and glockenspiel player Adele.

As music technology moved forward and sonic boundaries were broken, talent from women working behind the scenes remained a driving force. Referred to as the unsung heroine of British electronic music, Delia Derbyshire was born in Coventry in 1937. Qualified in mathematics and music, she was turned down for a job in a recording studio by Decca based on her gender, but she ultimately found work at the BBC’sRadiophonic Workshop. From 1962–1973, Derbyshire created the music for more than 200 radio and television programmes, including an electronic version of the Doctor Who theme, one of the first fully electronic TV themes. This, and her other recording projects, such as White Noise, influenced a number of electronic musicians and producers, including The Orbital, the Aphex Twin, and Martin Hannett.

In the history of electronic music, Delia Debyshire joins the ranks of other pioneering women, such as theremin virtuoso Clara Rockmore, synth trailblazer Suzanne Ciani, and the creator of the Clockwork Orange soundtrack, Wendy Carlos.

The late 1970s and early 80s signalled a liberation in popular music, as styles such as punk, new wave, and hip-hop brought the world of music back into the hands of ordinary people. In the U.K., the fierce sounds of punk rock were redefining music, and there were few voices as powerful and demanding as Poly Styrene of X-Ray Spex. She had an uncompromising delivery, a combination of a child-like voice and classical operatic training, and she refused to conform to traditional gender norms of pop music. “I said that I wasn’t a sex symbol and that if anybody tried to make me one, I’d shave my head tomorrow,” she once told reporters.

She was often cited a major influence on the the 90s Riot Grrrl movement, and her impact can still be felt. For more information, see the 2021 documentary Poly Styrene: I Am a Cliché. link 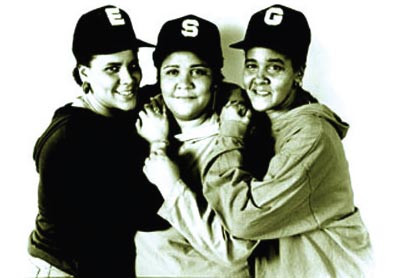 ESG one of the most sampled groups of all time

The Scroggins sisters formed the group ESG in 1978 in New York. Combining funk, hip-hop, and punk, the band hopped between genres like dub, no-wave, new wave, and soul while retaining a sparse, DIY grittiness that earned attention from underground labels both sides of the Atlantic.

ESG’s record UFO is one of the most sampled records in history, appearing on tracks by artists such as Public Enemy, Q-Tip, MF DOOM, Gang Starr, The Beastie Boys, and DJ Shadow. Though they never reached the commercial success they deserved in the 1980s, the band saw a resurgence of interest in the early 2000s, and were cited as an influence by groups such as LCD Soundsystem and Fujiya & Miyagi.

Positive representation in popular music can be empowering. “I remember A Lover’s Concerto by The Toys and The Happening by The Supremes as featuring the first female voices I wanted to emulate. It was years before I knew who those voices belonged to,” New Note’s Adele says.

“As a teenager I decided I’d like to be a backing singer because I figured they had the most fun. But I also have a vivid memory of sitting at the stage looking up at a beautiful female lead singer at a family wedding. I studied her moves and inflections intently.
I used to avidly watch Indian pop singer Ayshea Brough, who had her own programme called Lift Off on the BBC. Linda Ronstadt was an inspiration, as was Karen Carpenter. They seemed to be so versatile and adventurous. As a plump girl, I always saluted the great Cass Elliot, who showed me you didn’t have to be slender to be amazing.
In my teens, I worshipped Stevie Nicks and Christine McVie, who seemed to represent the equality women could achieve in the 70s. Fleetwood Mac gave me hope — all I had to do was sing and learn an instrument but alas I discovered boys and booze and drugs.”

Adele has been with the New Note Orchestra for five years. “Joining New Note opened a long-hidden door in my soul. The unconditional welcome and the variety of opportunities made it feel like entering a playground, and I’ve always tried to get to sessions if I can. When circumstances have stopped me going, I’ve noticed the difference in my well being. New Note has allowed me to be adventurous with music and develop in a new way. I love it! “

To celebrate International Women’s Day, here is a playlist of our favourite female trailblazers, who have we missed out?