Can music help the environment?

Can music help the environment? And what are the similarities between addiction and the climate crisis? We looked at the history of music and the biosphere and also spoke to Dr Helen M Prior, who is researching this subject.

Given the vast scientific data now available, it’s difficult to deny that the world is facing an ecological emergency. Rising temperatures are causing extreme weather conditions and environmental degradation. According to the United Nations, the changing environment is causing poverty, exacerbating inequality, and creating food and water insecurity, leading to increased conflict. The climate crisis is the defining struggle of our age, increasingly dominating political conversation, and it’s no wonder that artists from film and theatre to music and literature are talking about humanity’s impact on the environment. But what are the roots of environmental concern in music, and how can music help with the climate struggle?

The soundscape of the biosphere

Acoustic ecology is the study of the relationship between sound and the environment. The discipline was established in the 1960s, and it looks into the idea that sound is shaped by our environment and vice versa. Many acoustic ecologists consider how the sounds of our everyday lives are affected by our environments, noting the differences between, for example, the natural sounds in a forested area and the noise of increasingly urbanised environments such as cities. Such soundscapes can give an idea about how plant and animal species in different acoustic environments act and develop.

Meanwhile, many artists are experimenting with the ideas of acoustic ecology, such as the Alaskan-born musician Mathew Burtner, who records and performs music that reflects changes in his local environment.

In September 2020, the New Note Orchestra developed its own eco-acoustic project. Unable to meet and practice indoors due to COVID restrictions, we went to a woodland area in Hove to record in natural surroundings. The results were used in a presentation by Brighton Royal Pavilion.

History of music and environmental concern

Of course, natural surroundings have always been an inspiration for songs. Since humans started making music, it reflected our complex relationship with the environment. The natural beauty and savageness of all that surrounds has been a profound influence on composers over the ages — such as The Storm by Tchaikovsky or The Blue Danube from Johann Strauss.

However, the history of modern ecological songs can be traced all the way back to 1837 when the song Woodman, Spare that Tree! was published. Written as a poem by George P. Morris and set to music by Henry Russell, the song, which is still quoted by environmentalists to this day, contained lyrics such as, “Woodman, spare that tree! Touch not a single bough! In youth it sheltered me, and I’ll protect it now.”

In 1962, Malvina Reynolds recorded her protest song What Have They Done to the Rain? This was in response to concerns about nuclear testing causing the radioactive substance strontium-90 to enter the food chain through nuclear fallout. The song was covered by the Mereseybeat group The Searchers and charted in both the UK and the US in 1963.

“Big Yellow Taxi” is one of the most famous ecological songs. Written and recorded by Joni Mitchel in 1970, the song was inspired by a trip to Hawaii. “I took a taxi to the hotel, and when I woke up the next morning, I threw back the curtains and saw these beautiful green mountains in the distance. Then, I looked down and there was a parking lot as far as the eye could see, and it broke my heart — this blight on paradise. That’s when I sat down and wrote the song,” Mitchel told the LA Times in 1996.

The song also made reference to DDT, a popular pesticide at the time: “Hey farmer, farmer, put away your DDT, give me spots on my apples, give me the birds and the bees.” DDT had been a subject of the 1962 book Silent Spring, in which the influential biologist and conservationist Rachel Carson accused the chemicals industry of spreading disinformation. The fight against the use of DDT was taken up by many environmental activists.

In 1971, Mavine Gaye released Mercy Mercy Me (The Ecology), the second single from his concept album “What’s Going On.” The song made reference to the general degradation of the environment from the point of view of a returning Vietnam veteran. The song contained phrases such as, “Oil wasted on the ocean and upon our seas, fish full of mercury,” highlighting growing concerns about food contamination and the dangers that fossil fuel accidents posed to ocean ecologies. 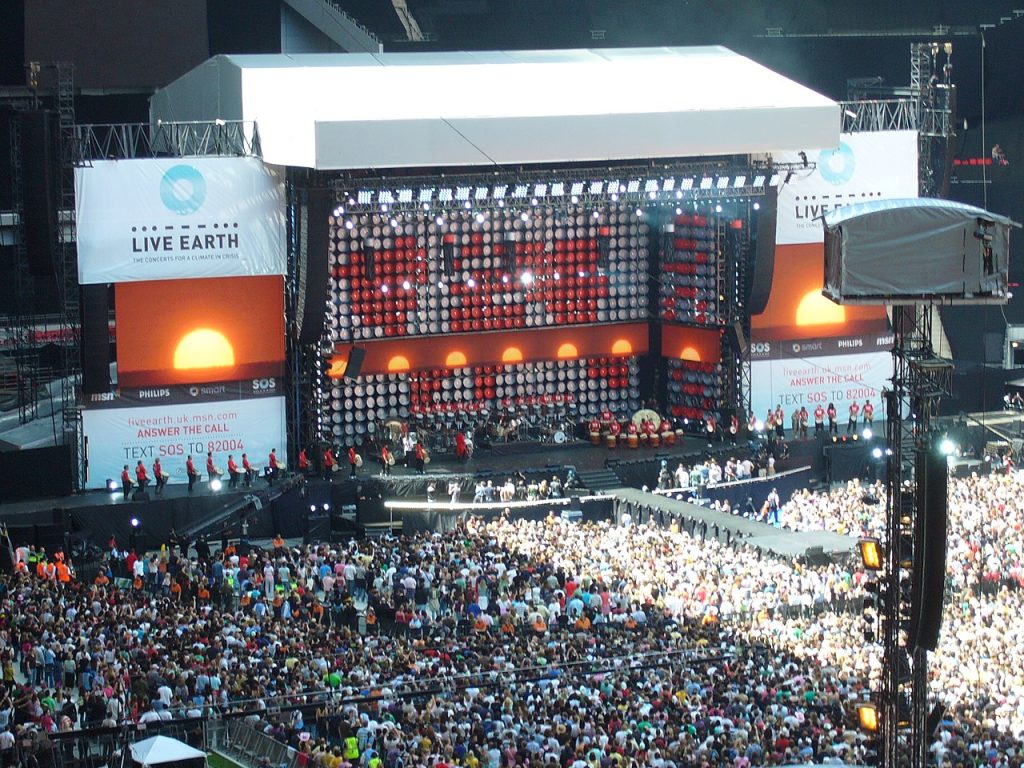 As general concern grew in the 1980s, big-name acts such as REM and George Harrison became vocal and financial supporters of organisations like Greenpeace. Michael Jackson’s 1985 release Earth Song came during a societal shift in attitudes to the environment, as a generation of children grew up in a world where discussions about global warming and the ozone layer were commonplace.

On 1 July, 2007, the first Live Earth events took place around the world. The concerts, which featured many of the biggest stars of the day, were put on to raise awareness of the increase in global temperatures. The collective event has been both praised and criticised. It was well attended and did much to trigger debate about important environmental issues. However, some commentators criticised its actual environmental impact, with artists using private jets and helicopters in their travels. According to CarbonFootPrint.com, Live Earth had a carbon footprint of at least 31,500 tonnes, more than 3,000 times that of the UK’s average footprint. Questions have also been raised about where the proceeds of ticket sales went.

The question of how music can help with the climate emergency can be answered in various ways. Of course, as part of the global conversation about the climate, all arts play an important part. Though it might seem that we have to rely on technologists, heads of industry, and political leaders to make the big decisions, music can still be a driving force for change.

In February 2022, Dr. Helen M. Prior, a music psychologist and senior lecturer at the University of Hull, published a paper titled “How Can Music Help Us to Address the Climate Crisis?” In it, she suggests some ideas for further research. First, the emotional response of music can help people to make better decisions when it comes to pro-environmental behaviour. For example, encouraging people to pair the use of public transport, cycling, or walking with their own music selections could make more environmentally friendly forms of transport more appealing.

Dr. Prior points out a correlation between music tastes and attitudes towards environmental issues. For example, fans of country and western, sixties pop, classical music, and opera were most 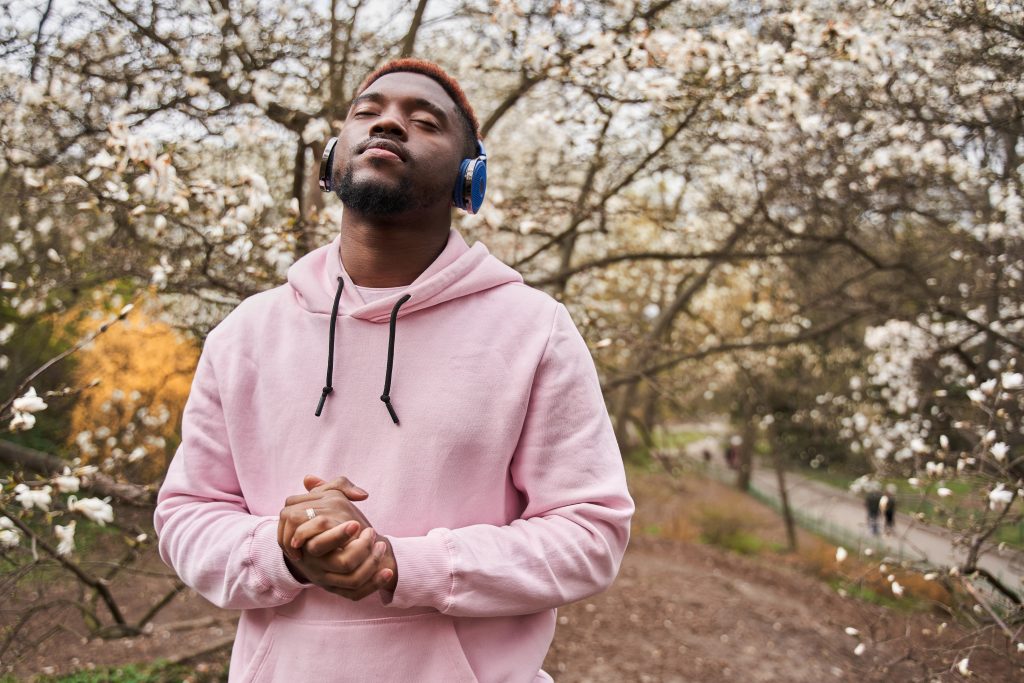 likely to recycle. Working with influential artists in various genres — especially those linked with low levels of recycling — might encourage listeners to engage in more environmentally friendly behaviours.

It has been hypothesised that exposure to natural sounds and soundscapes can increase the salience of the natural environment. For example, sounds that are recorded from, or resemble, environments such as the rainforest, encourage us to recognise that we live in a fragile, but lush and diverse world. Reminding us of this may lead to more environmentally friendly actions

“Music can be incredibly powerful, and lots of musicians are using music to try to influence people’s environment-related beliefs and behaviours. It is interesting and helpful to try to find out whether or not that music is having the intended effect, and if so, how that happens. Is it because of the emotional responses the listener experiences; through stereotypes or social norms; through increased feelings of empathy or altruism; or through an increased environmental awareness because of the particular sounds heard? There are many possible mechanisms, and there is some fascinating research to be done to explore those in more detail,” Dr Prior told us.

In both instances, there are repetitive, damaging behaviours that seem difficult to stop.In addiction, there is often the reliance on drugs or alcohol. In the environmental crisis, there is the reliance on fossil fuels and plastics.

Similarly, denial can play a large part. Many addicts claim that their use or other addictive behaviour is not problematic, despite evidence to the contrary. On 17 June, Antonio Guterres, the UN secretary general, tweeted: “For decades, the fossil fuel industry has invested in pseudo-science & public relations, with a false narrative to minimize their responsibility for climate change & undermine ambitious climate policies. They exploited the same scandalous tactics as Big Tobacco decades before.”

For decades, the fossil fuel industry has invested in pseudo-science & public relations, with a false narrative to minimize their responsibility for climate change & undermine ambitious climate policies.

They exploited the same scandalous tactics as Big Tobacco decades before.

But if the climate emergency is similar to addiction, maybe there is also a similar road to recovery? These ideas are all being investigated as part of New Note’s new performance. Written and rehearsed over 2021–2022, A Green Recovery sees the orchestra return to the stage after a two-year absence.

The New Note Orchestra will be performing A Green Recovery on:

14th July at the Old Market, in Hove, with Wham Jam Thank You Ma’am

15th July, also at the Old Market, with The Jam Tarts